All you need to know about Brahmarupa Mahakala 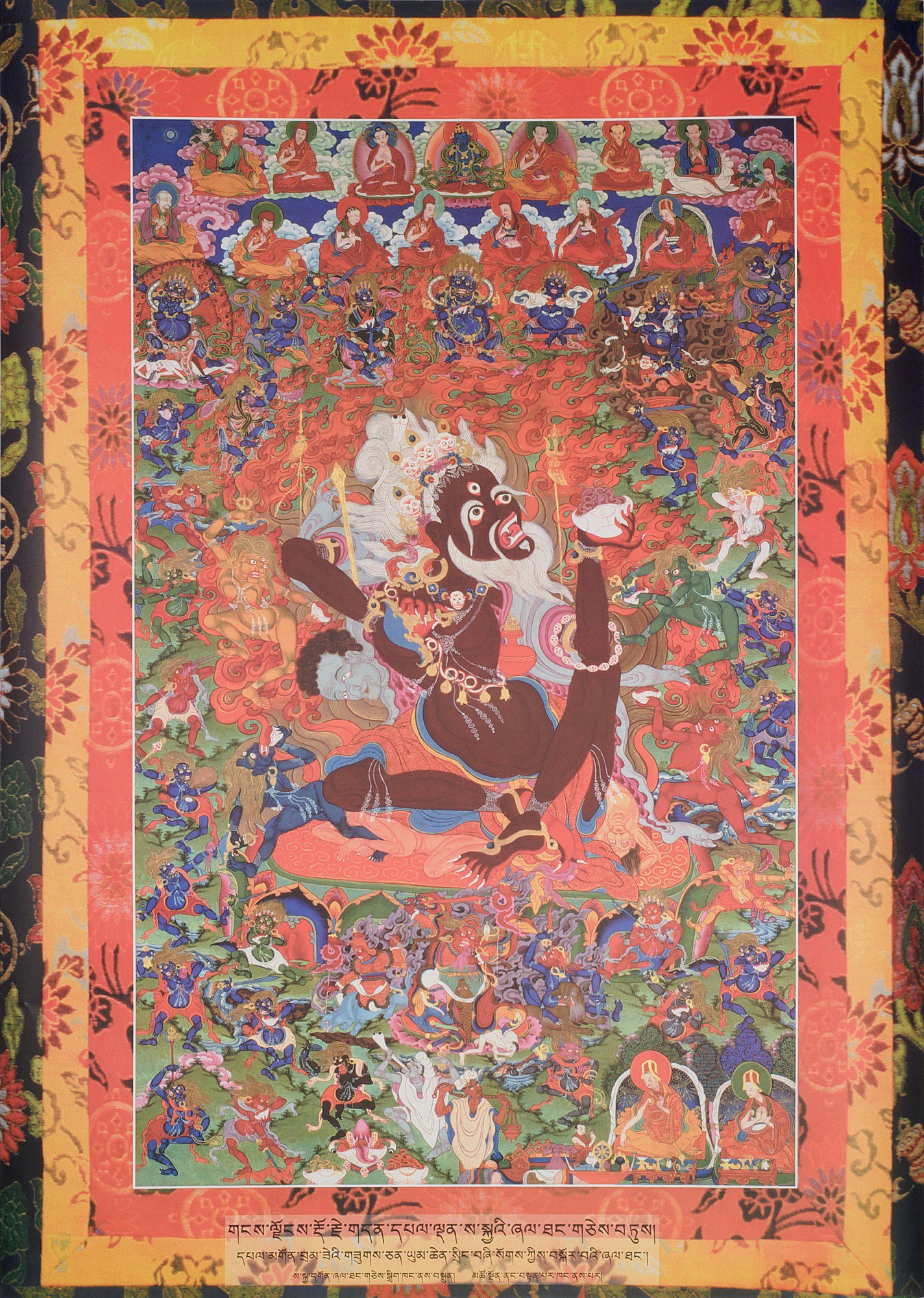 All you need to know about Brahmarupa Mahakala

Brahmarupa, a benign form of the wrathful deity Mahakala, is shown as a bearded nomadic ascetic, sitting on a corpse, wearing a bone apron, and holding a thighbone trumpet and a skull cup.

A protector of the Sakya school of Tibetan Buddhism, he is credited with introducing the Hevajra Tantra, an important Vajrayana text, to the Sakya hierarchs.

Mahakala Bramanarupa is one of over 70 different deities of the Mahakala type. These are wrathful deities particularly adept at quelling monsters and overcoming demons, whether they be outer, inner, or secret. Some deities, such as Avalokiteshvara have their own Mahakala form.

Gonpo takes the guise of a brahman to appear in the world of ordinary beings. This Mahakala is from the Sakya Ngor Monastery located to the southwest of Lhasa where he is honored as one of their patron deities. Brahman refers to the priestly caste in the traditional Hindu system, which stressed purity. Although no longer accepted today, traditionally caste was linked to one’s skin color the high caste brahmans had light skin, lower castes had dark skin.

The Buddha strongly objected to this concept and stressed the importance of a person’s heart and mind over their external characteristics determined by birth. In the Buddhist concept, you were of a high caste if you had pure altruistic motivation.

You were of a low caste if you were harmful to others. By showing a dark-skinned brahman in such close proximity to corpses and other impurities, this manifestation of the deity aggressively confronts the racism of the traditional caste system and conveys the message that one cannot be polluted by death or outward appearances. In Buddhism, the only pollution rests within.

Brahmarupa Mahakala is a benign form of the wrathful deity Mahakala. He is credited with introducing the Hevajra Tantra.

He wears bone ornaments, intestines, and human skin he sits atop a human body. 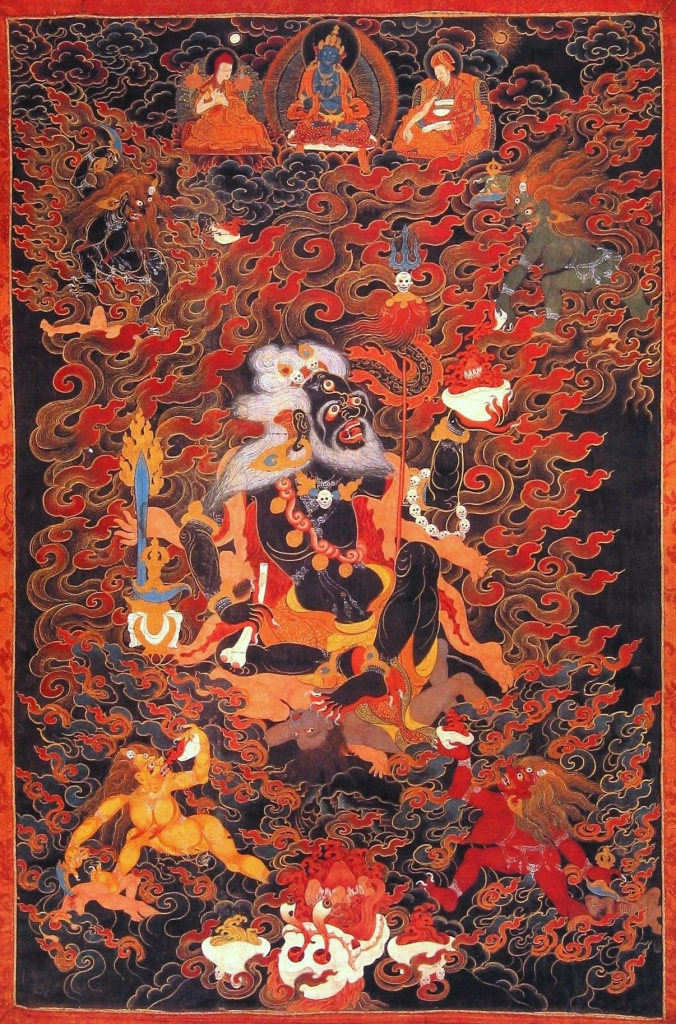 By depicting this thangka, we are going to learn about the presentation of Brahmarupa Mahakala with different deities such as Vajradhara, Ngorchen Kunga Zangpo, and Sakya lama, etc.

He was a contemporary of Rongton Sheja Kunrig and a teacher of Shakya Chokden and Gorampa Sonam Senge. He founded Ngor Monastery in 1430.

By depicting this thangka, we are going to learn about the presentation of Brahmarupa Mahakala with Green Tara and Lama. 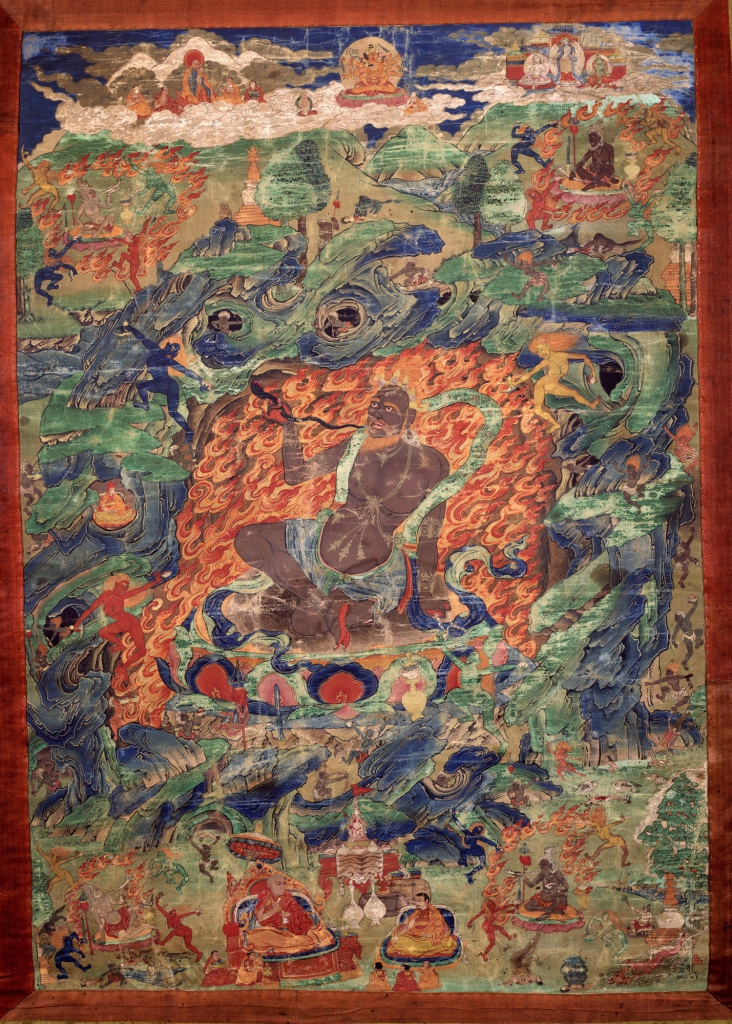 Manjuvajra Guhyasamaja is embracing the consort with three faces and six hands.

Green Tara is presented on the right side of the thangka. Manjuvajra Guhyasamaja is the female figure.

The Lama is presented at the bottom center of the thangka. Lama wearing monastic robes. Lama is holding a vajra and bell. He is seated on an elaborate throne. 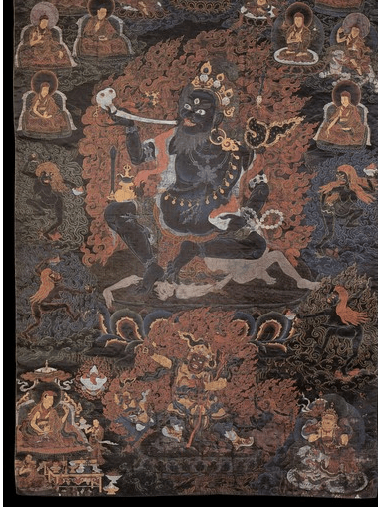 Begtse Chen is presented at the bottom center of the thangka. Begtse Chen is flanked by his consort and son. He is the Mistress of Life and Lord of Life.

The donor figure is presented at the lower-left corner of the thangka. Donor figure is the inscription of Ewam Rinchen Migyur Gyaltsen of the Luding Labrang and the 37th Great Abbot of Ngor Ewam Monastery.