Depicting Sakyamuni Buddha with the 35 Buddhas of confession 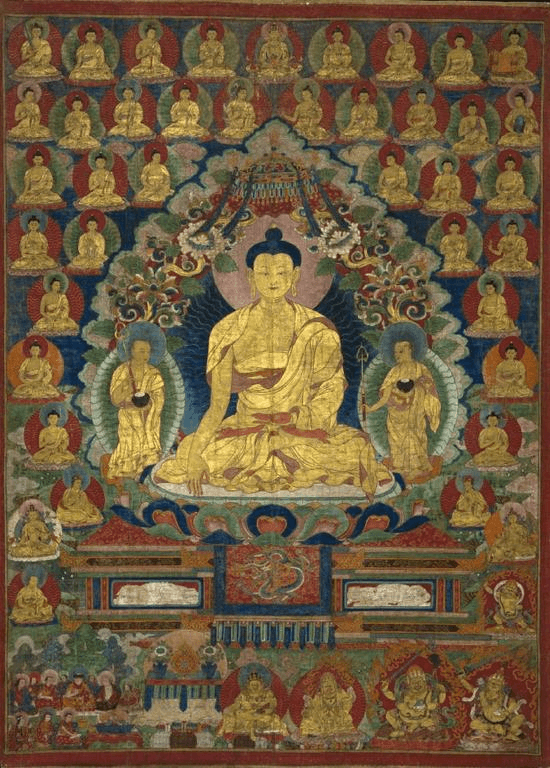 Depicting Sakyamuni Buddha with the 35 Buddhas of confession

Shakyamuni Buddha (Tibetan: sha kya tu pa, sang gye. English: the Enlightened One, Sage of the Shakya Clan) together with the two principal students, Shariputra and Maudgalyayana standing at the sides, while surrounded by the Thirty-five Confession Buddhas.

The general subject of the painting is Shakyamuni Buddha and the Thirty-five Confession Buddhas.

Shakyamuni is the leader of the Thirty-five Buddhas. The painting belongs to the Karma Kagyu Tradition of Tibetan Buddhism. The majority of figures are painted in gold.

The date of the painting based on stylistic elements is approximately 17th to early 18th century – not later than 1732 for reasons which will be discussed below.

However, based on the figures in the composition and dated comparable work this painting can be comfortably dated to circa 1670.

On the viewer’s left of the large central Shakyamuni Buddha is a standing Shariputra and on the right side is Maudgalyayana.

These two are the principal students of the Buddha. In their right hands they hold the monk’s staff called a Kakkar. Held in the left hand is a black begging bowl.

Neither Amitayus nor Amitabha are found in any list of the Thirty-five Confession Buddhas. Amitayus is included at the top of the composition for auspiciousness but could have been substituted with the figures of Vajradhara Buddha or possibly Vajrasattva.

The painting is associated with the Karma Kagyu (Khamtsang) Tradition of Tibetan Buddhism as is evidenced by the inclusion of two Tibetan teachers wearing the unique black and red caps of the Karma Kagyu school.

The two are located slightly below and behind the Two Principle Students of the Buddha. The black hat Karmapa is on the viewer’s left and the red hat teacher on the viewer’s right.

Depiction of painting according to Time

As for the dating of the composition, if the painting is from the 17th century then the black hat Karmapa will be the 11th, Yeshe Dorje (1675-1702) and the red hat teacher will be the 6th Gyaltsab, Norbu Zangpo (b.1660).

These latter two teachers passed away together of smallpox while returning from China in 1732. There is a painting in the Rubin Museum collection that is comparable in line work, clouds, and color to the painting of Shakyamuni and the Thirty-five Confession Buddhas.

The painting is of the Mahasiddha Virupa and is dated confidently to between 1659 and 1671 based on an inscription on the back of the work.

With that comparable and confident dating it becomes very likely that this Shakyamuni painting is depicting the 11th Karmapa and the 6th Gyaltsab and commissioned in the last quarter of the 17th century based on the life span dates of the two teachers.

Ritual and arts of the Tibetans

The Thirty-five Confession Buddhas are arranged to the sides and below on the right and left descending halfway down the composition.

In Himalayan and Tibetan art there are at least three different iconographic systems for depicting the individual Thirty-five Confession Buddhas.

The principal authors of commentaries and ritual texts were Nagarjuna (not necessarily the famous Arya Nagarjuna), Sakya Pandita and Je Tsongkapa along with a number of others.

The Tibetan Buddhist Resource Center has approximately sixty texts associated with the practice of the Confession Buddhas.

This is generally depicted with a blue body and a white neck and head. He has a hood of seven snakes and the hands perform a gesture of teaching at the heart.

This form of Nageshvara Raja follows the descriptions from the texts of Jowo Atisha describing the meditational deity Nageshvara Raja. The remaining thirty of the Thirty-five Buddhas display only hand gestures without any physical attributes.