Kṣitigarbha is also known as bodhisattva primarily revered in East Asian Buddhism who is usually depicted as a Buddhist monk in the Orient. Ksitigarbha is known for his vow not to achieve Buddhahood until all hells are emptied.  Therefore, Ksitigrabha is also regarded as the bodhisattva of hell-beings.

The Life of Ksitigarbha

In this portion, we are going to learn about the life of Ksitigarbha, after that, we will present the short etymological description of the ord Ksitigarbha itself.

Ksitigarbha is known as phage pa Sa’i snying Po in Tibet. The meaning of Ksitigarbha is the Essence of the Earth in English. Ksitigarbha is one of the four principal bodhisattvas in East Asian Mahayana Buddhism.

In the iconography of Ksitigarbha, we will learn about his body posture, hand and leg gesture, and different representations of Ksitigarbha in tangka and statue.

Kshitigarbha is rarely if ever depicted alone in painting or created as a single sculpture. He is despited in the Lineage Tree of Nyingma. He is almost always included as one of the Eight Great Bodhisattvas typically appearing with the others seated below the Amitabha Buddha in the Sukhavati Heaven or with Shakyamuni Buddha.

Kshitigarbha is yellow with a yellow upper garment. He has peaceful eyes. On the side of Ksitigarbha, there is red a headdress garland of blue flowers. The right-hand holds fruit and the left a jewel above a lotus.

In Buddhist iconographies, Ksitigarbha is typically depicted with a shaven head, dressed in a monk’s simple robes.

In Ksitigrsbhs’s left hand, Ksitigarbha holds a wish-granting jewel in his right hand, he holds a monk’s staff called in Japanese a shakudo, which is used to alert insects and small animals of his approach so that he will not accidentally harm them. Such a staff is traditionally carried by high ranking monks of Chinese Buddhist temples.

Usually, He will sometimes be seen wearing a crown depicting the Five Dhyani Buddhas,  which was worn by Tibetan and Chinese monks in Tantric rituals.

Like other Bodhisattvas, Kṣitigarbha usually is seen standing upon a lotus base, symbolizing his release from the karmic wheel of rebirth. Kṣitigarbha’s face and head are also idealized, featuring the third eye, elongated ears, and the other standard attributes of an enlightened being.

The Narihira Santosen Temple which is located in Katsushika, Tokyo contains the Bound Jizo of Ooka Tadasuke fame, dating from the Edo Period.

On the occasion of the new year, the ropes of the ungranted wishes are cut by the temple priest. The vandalism of a Jizo statue is the theme of the J-Horror movie Shibuya Kaidan. The anime series Jigoku shoujo is also loosely based on the legend of the Jizerou.\

There is another legend about how Kṣitigarbha manifested in China and chose his Bodhimanda to be Mount Jiuhua, one of the Four Sacred Mountains of China in Buddhism. In the Eastern of China Han dynasty, during the reign of Emperor Ming, Buddhism started to flourish, reaching its peak in the era of the Tang Dynasty, eventually spreading to Japan and Korea. At the time, monks and scholars arrived from those countries to seek the Dharma in China.

One of all these pilgrims was a former prince of Korea and which was at the time divided into three countries. The monk, whose Korean romanization was Kim Kiaokak was a prince from Silla who became a monastic under the name of Earth Store. Ksitigrabha came to the region of Anhui to Mount Jiuhua.

After ascending, Ksitigrabha decided to build a hut in a deep mountain area so that he may be able to cultivate. According to records, the monk was bitten by a poisonous snake but did not move. Thus letting the snake go.

A woman happened to pass by and gave the monk medicines to cure him of the venom, as well as a spring on her son’s behalf. For a few years, the monk continued to meditate in his hut until one day and a scholar named Chu-Ke led a group of friends and family to visit the mountain. Noticing the monk meditating in the hut, they went and took a look at his condition.

Chu-Ke led group had noticed that the monk’s bowl did not contain any food and that his hair had grown back. Feeling pity for the monk, Scholar Chu decided to build a temple as an offering to the monk. The whole group descended the mountain immediately to discuss plans to build the temple.

Mount Jiuhua was also called the property of a wealthy person named the elder Wen-Ke, who was obliged to build a temple on his mountain. Therefore, Wen-Ke and the group ascended the mountain once more and asked the monk how much land he needed. The monk  Ksitigrabha has replied that he needed a piece of land that could be covered fully by his Kasaya.

Sometime later, Wen-Ke’s son also left the home life to start his life as a monk. The monk  Ksitigrabha lived in Mount Jiuhua for Seventy-five years before passing away at the age of ninety-nine. Three years after his nirvana, his tomb was opened, only to reveal that the body had not decayed. Because the monk-led his way place with much difficulty, most people had the intuition to believe that he was indeed the transformation body of Kṣitigarbha.

We will learn about East Asian Mahayana Buddhism and  Ksitigarbha.

Ksitigarbha is also known as one of the four principal bodhisattvas in East Asian Mahayana Buddhism in the world. The next are Samantabhadra, Manjusri, and Avalokitesvara.

At the pre-Tang Dynasty grottos in Dunhuang and Longmen, Ksitigrabha is also called depicted in classical bodhisattva shape.

After the Tang Dynasty, Ksitigrabha has become increasingly depicted as a monk, carrying rosaries and staff. Ksitigrabha’s full name in Chinese script is the Bodhisattva King Dizang of the Great Vow,  which is also pronounced as Dayuan Dizang Pusa in Mandarin Chinese,  and Daigan Jizo Bosatsu in Japanese. Because of the important role, shrines to Kṣitigarbha often occupy a central role in any Oriental Mahayana temples.

The Great Vows of Ksitigarbha Bodhisattva

We are going to learn about the great vows of Ksitigarbha bodhisattva.

The story of Ksitigarbha sutra is described in the Sutra of The Great Vows of Ksitigarbha Bodhisattva, which is also called one of the most popular Mahayana Buddhist sutras.

The sutra is also said to have been spoken by the Buddha towards the end of his life to the starting of the Trayastriṃsa Heaven as a mark of gratitude and remembrance for his beloved mother, Mayadevi. This also stated that Kṣitigarbha practiced filial piety as a mortal, which eventually led to making great vows to save all sentient beings.

The Buddha of Flower of Meditation and Enlightenment

We are going to learn about the buddha of the flower of meditation and enlightenment.

In the Ksitigarbha Sutra, the Buddha has claimed that in the distant past eons, Ksitigarbha was a Brahmin maiden by the name of Sacred Girl. She was very deeply troubled when her mother died because a sacred girl had often been slanderous towards the Triple Gem.

To save her from the great tortures of hell, the young girl sold whatever she had and used the money to buy offerings that she offered daily to the Buddha of her time, known as The Buddha of Flower of Meditation and Enlightenment.

She made fervent prayers that her mother is spared of the pains of hell and appealed to the Buddha for help.  while she was pleading for help, she heard the voice of the Buddha advising her to go home immediately.  He has also suggested to sit down and recite his name if she wanted to know where her mother was.

Ksitigrabha did as she was told and while doing so, her consciousness was transported to a Hell Realm. where she met a guardian who informed her that through her about fervent prayers and pious offerings. Ksitigrabha’s mother had accumulated much merit and therefore, she had already been released from hell and ascended to heaven.

Ksitigrabha was greatly relieved and should have been extremely happy. Buy the sight of the great suffering Ksitigrabha had witnessed in Hell so touched her tender heart. Ksitigrabha made a vow to do her very best to relieve beings of their suffering forever in her future lives of Kalpas to come. 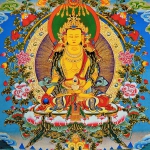