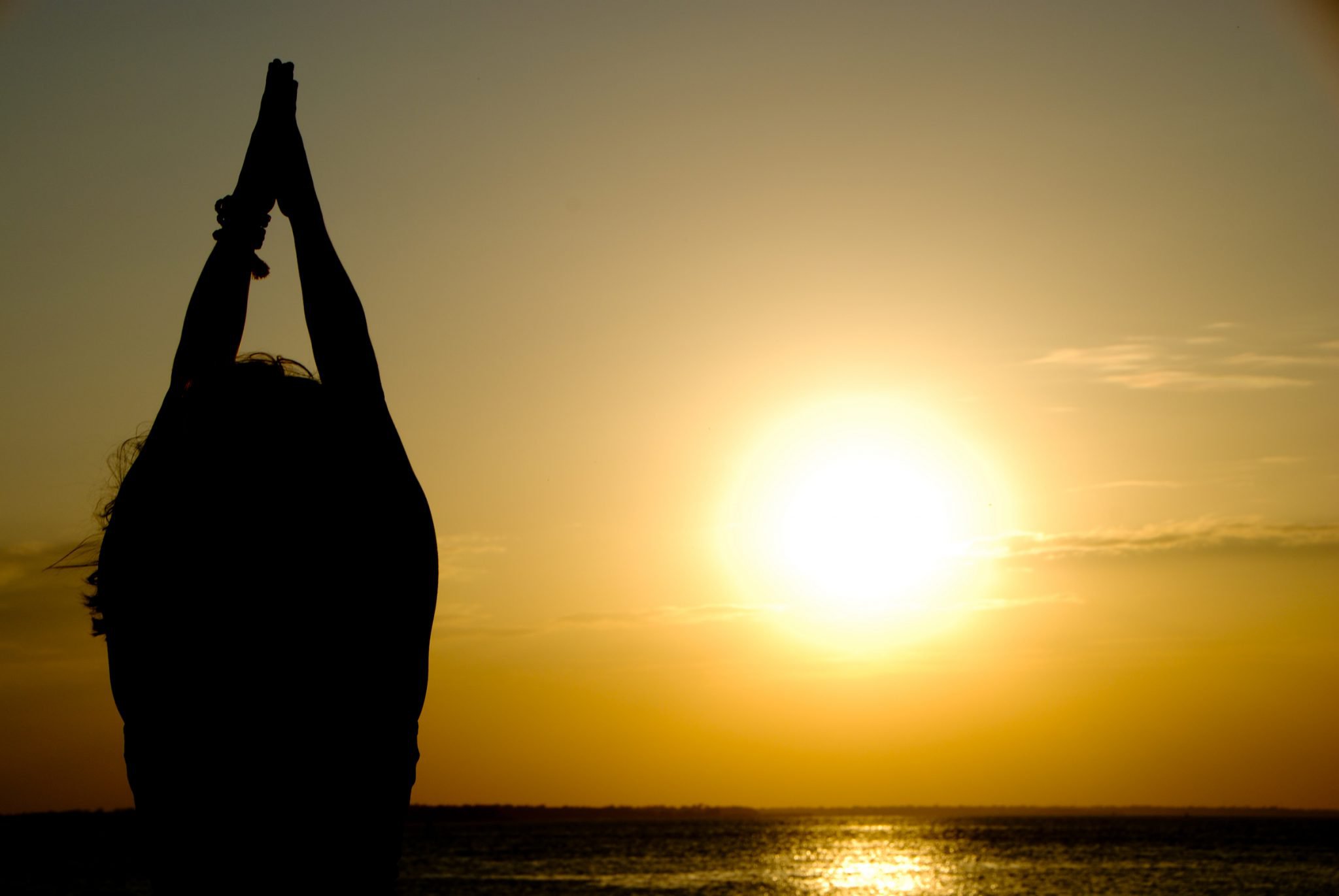 Surya means Sun in Sanskrit literature, and the term Namaskara signifies salutation. Thousands of years ago, a great sage Patanjali his fellow disciples created these unique postural and breathing protocols on the Indian subcontinent. They urged all human beings in their everyday lives to perform these yogic practices in front of the Sun for good health, mental, and physical harmony.

The life on the Earth is only possible through the energy from the Sun. Ancient Rishis and Saints brought in the practice of Surya Namaskar as a means of showing respect and gratitude to the Sun; which is the source of all forms of life on the Earth. Popularly known as Sun Salutations in the West, it has both scientific as well as spiritual significance.

Different parts of the body are governed by various Devas (divine impulses or divine light), according to the ancient Rishis of India. It is said that the solar plexus(located behind the navel, which is the central point of the human body) is connected to the Sun. The only reason why ancient Rishi’s recommended the daily practice of Surya Namaskar as this technique stimulates the solar plexus, which increases the creativity and intuitive abilities of the practitioner. 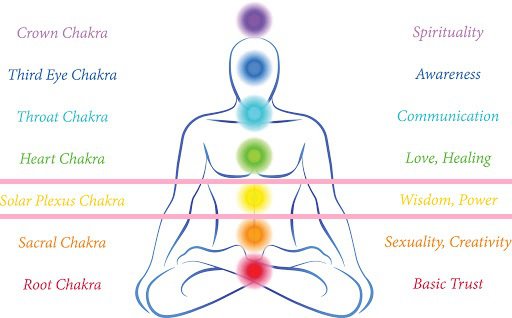 The hectic lifestyle we live leads to depression, stress, and other mental illnesses. All in all, Surya Namaskar is a form of yoga that offers relief from these problems and calms our mind.

In another study “Effects of Surya Namaskar on relaxation among college students with high stress in Pune, India” where there were two groups – a controlled group and an experimental group. The experimental group was found to be higher on the R-dispositions of physical relaxation, mental silence, at ease/peace, rested and refreshed, intensity and awareness and joy and lower on sleepiness, and stress conditions – somatic tension, anxiety, and negative emotion.

A research article titled “Effect of Surya Namaskar on Sustained Attention in School Children” researched with 64 students revealed that, after performing Surya Namaskar for a month, the children showed considerable improvement in their attention spans.

There are two sets in each round of Sun Salutation, and each one is composed of 12 yoga poses. You could find many variations of Sun Salutation. It is safer, however, to stick to a single version and practice it consistently for the best results. For a spiritual experience, it is recommended to practice Surya Namaskar along with chanting mantras. Each posture has a different mantra. 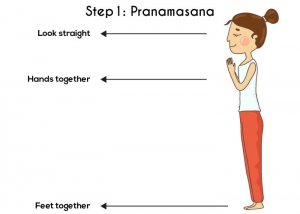 Start by standing on your yoga mat. Keeping the legs together and balancing weight equally on both leg is also equally important. Now expand the chest, and relax the shoulders. Raise both arms from the sides as you breathe in, and as you exhale, bring your palms together in the prayer position in front of the chest. 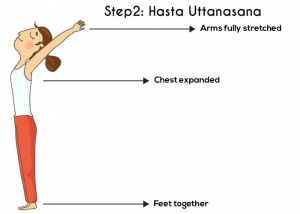 Breathing in, and lifting your arms back and up, hold your biceps close to your ears. The purpose of this pose is to stretch the whole body from the heels to the tips of the finger. 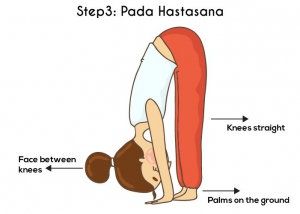 Breathing out, and bending from the waist forward, hold the spine upright. Bring your hands down to the floor besides your feet, as you exhale.

To deepen this pose: Holding the hands fixed in this position is a good idea and not shifting them until we finish the sequence. 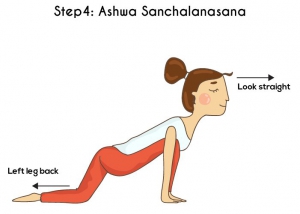 Push the right leg up, as far back as possible, by breathing in. Bring your right knee on the ground and lookup.

To deepen this pose: Make sure the left foot is exactly between the palms. 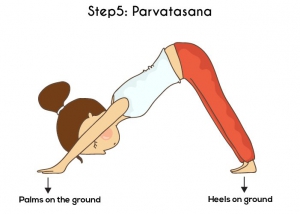 Take the left leg back as you breathe in and bring the whole body in a straight line. Also, don’t forget to keep your arms perpendicular to the floor. 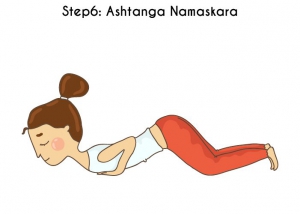 Bring your knees down to the floor gently, and exhale. Taking your hips back, slide forward, such that your chin and chest rests on the floor. Slightly raise your buttocks. You will notice that the floor is touched by your palms, feet, knees, chest, and chin. A total of eight parts. 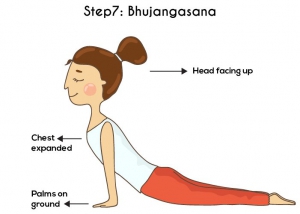 Slide your body forward now. Up in Cobra/Snake Pose, lift your chest. It is important to bend your elbows and place your shoulders away from your face. Turn your eyes upward. 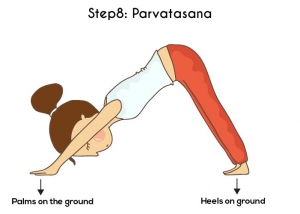 Breathing out, lift up the hips and tail bone, and put chest downwards in an ‘inverted V’ (/\) pose.

Try to keep the feet on the floor if possible and make a gentle attempt to raise the tailbone up, going deeper into the stretch. 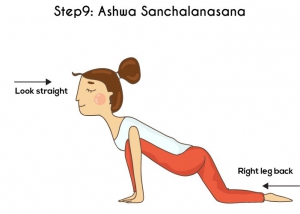 As you breathe in, bring the right foot forward in between the two hands,  bending your Left Knee, place your arms next to your feet. Lookup by pressing your hips down. 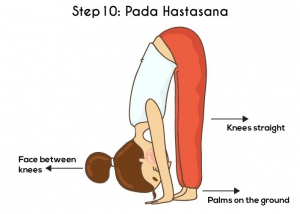 While exhaling, bring the left foot forward and bend from the waist. Keep the palms on the floor and be in the posture for a good 30 seconds. 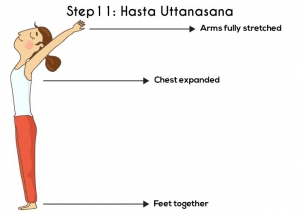 Breathing in lift your arms up and bend towards backward. Make a little effort to push the hips slightly outward. Make sure that your biceps are touching your ears. The motive is to stretch up more rather than stretching backward. 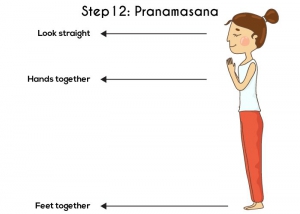 Exhaling slowly, straighten the body and bring the arms in prayer position. Relax in this posture and observe the body and sensations.

Practicing Surya Namaskar early in the morning or in the evening in an empty stomach gives incredible health benefits.

The set of 12 postures acts as both warm-ups and the asanas.

It works on the entire body and tones all your body parts including arms, abs, thighs, and butt.

The slow-paced version of Surya Namaskar will help make your body flexible.

The fast-paced version of Surya Namaskar acts as an excellent cardiovascular exercise, hence good for someone opting for a quick and nice workout.

Regular and consistent practice over a period of time ensures a perfect balance in the body.

It regulates the interconnectedness of body, breath, and mind at a psychological level, thus making you calmer and increasing energy levels with sharpened awareness.

Deep breathing and chanting in each asana facilitates a balance between the right and left sides of the brain. Hence, maintains good emotional stability.

With each inhalation and exhalation, the lungs and blood remain thoroughly oxygenated and the body gets detoxified.

Do a little warmup before starting Surya Namaskar. It helps to remove the tension and restlessness in the body and prepares your body for smooth yoga training.

Tip 2: Where to Face

It’s a good idea to face East Direction if you are doing Surya Namaskar in the morning. For the evening, it is recommended to face West Direction.

Breathing in the correct manner is one of the important things to remember. Normally, inhalation is done in upward pose and exhalation in the downward pose.

Tip 4: Do on Empty Stomach

Surya Namaskar should always be done on empty stomach. Or should be done at least 4 hours after the meal.

Tip 5: Quality rather than Quantity

Make Surya Namaskar a long-lasting and consistent lifestyle instead of doing it a few times a week. 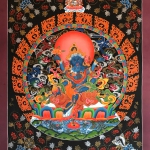 Tibetan Thangka of Black Jambhala is an authentic piece of artwork from Kathmandu, Nepal. It is painted on Handmade Cotton Canvas.
Buy Black Jambhala Thangka